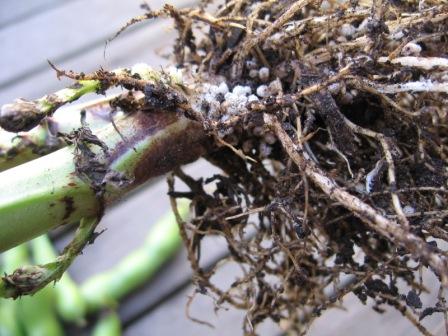 the distinctive nodes on a nitrogen fixing plan

I was working in my daughter’s classroom garden yesterday and we noticed a virtual explosion of fava bean seedlings.  We did not plant these this year but I know they had been planted in years past.  Those seedling were by far the happiest and most prolific in the garden and they weren’t even intended to be there!  Hmmmm, I remembered from my permaculture course that the fava bean (along with other legumes) is a nitrogen fixer.  Oh wow, this really got me excited because now I could talk to the kids about this very special plant with very special talents.  We pulled out some of the seedlings and looked at the weird white nodules on their roots that make the nitrogen fixing possible.  I explained to the kids that we have nitrogen in the atmosphere and in the soil and that only a few special plants can actually take nitrogen out of the air and use it.  All other plants have to rely on the nitrogen in the soil.  That got them thinking and one curious gardener asked what happens to the nitrogen after the plant takes it out of the air.  I explained that the plant uses it to grow and once that plant decomposes in the soil (roots, stalk and all) it will release it’s nitrogen to the other plants.  This made even more sense when I said that I was going to take all of those unwanted fava beans as well as the red clover (also a nitrogen fixer) and put them in my compost at home.

One of the most fascinating things I learned in my permaculture design course if the succession of pioneer plants that come in to a disturbed soil.  If a soil is poor in a nutrient such as nitrogen, then a nitrogen fixer can get a good foothold, thrive, decompose and in doing so helps address the deficiency and lays the groundwork for the next plant species.  This link shows how annuals lay the ground work for biennials / perennials, then shrubs and so on until a mature hardwood forest is formed.  Anyone who has started with bare earth and planted a garden knows that the fight with stubborn weeds (the annual pioneers) is the hardest in the beginning and as the soil quality improves the weeds just don’t seem to thrive.  Instead of cursing those dastardly weeds I think we should be thinking them as they are doing the most amazing service – slowly and so effectively.